We recently wrote about the things you can do when you visit Starigrad-Paklenica, and of all we mentioned a couple of places like Paklenica national park or Zrce beach. This blog will be all about these places and we hope everyone will find something that’s up to their taste.

One day excursions from Starigrad-Paklenica

So, you’re here and you would like to take your family or friends to one day excursions from Starigrad-Paklenica (you just want them to be as near as possible). Hopefully, as we mentioned earlier, and what we like to brag about, Starigrad is right there in the middle of everything cool there is to see on Croatian coast. But first, let’s start with mountains. Mountain Velebit to be exact.

We won’t go in too much detail because we have a whole blogpost dedicated to it. But, Velebit and Paklenica must be mentioned in this article. Almost everyone who come to Starigrad are obliged to visit this national park – some of them come for hiking, some of them for climbing, and some of them just want to experience its beauties and maybe take a picture or two. But everyone is amazed by the nature and wildlife with promises that they’ll return here as soon as possible.

Yes, it’s true. Starigrad is right there in the middle of three great Croatian national parks, with Kornati and Plitvice lakes being the other two. There is a saying that when God created the world he used the remaining stones and land (which he couldn’t use elsewhere) and scattered them in the Adriatic sea. Thus, Kornati archipelago emerged with its simply breathtaking blue waters and white islands. If you come here in Starigrad, make sure you book a one day boat trip to Kornati. You’ll never forget it, we promise.

This one is for our adventure lovers. Modrič cave is a prime example of untouched nature: found only two decades ago it is almost intact by men. To keep this beautiful cave in shape for further generations you can only visit it in small groups so make sure you book your visit in time.

Krka river, located just 100 km from Starigrad (situated near the old town of Šibenik) is a nice place to take your family and friends on a one day trip. Its clear blue and green waters offer great scenery for taking pictures and there’s also a place inside the park where people come to bathe and swim. So, after you return home, you’ll have a story of how you swam in a river that’s also a national park.

There are two things Croatia is known for abroad: Dubrovnik and Plitvice lakes. You’ve probably seen it in nature and wildlife magazines or TV shows about our country. And what’s the greatest thing – everything they said it’s true. And even more. More than one million people every year come here to see the most beautiful 16 lakes arranged in cascades in the world. Founded in 1949 it is the oldest national park in Southeast Europe and the largest national park in Croatia. Plitvice lakes national park is located just 135 km from Starigrad-Paklenica or just a two hour drive from here. 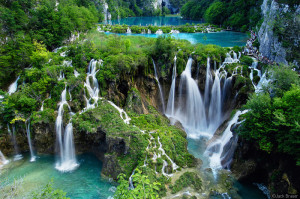 If you’re up for some culture and history then these three towns offer a treat. Travelling from Starigrad you could visit them all in one day. First on your route should be Nin, just 50 km from Argyruntum Apartments. It’s a place blooming with history and culture, one of the first towns Croatians founded upon arriving to Dalmatia. Later on in 10th century Nin was famous for being sort-of-a-capital of Dalmatia with first Croatian bishop presiding here. Next stop for you should be Zadar, the largest city in central Dalmatia, and a place where all the cultural findings of this area are kept. We recommend you visit the Church of St. Donatus, built in 9th century this is the largest pre-romanesque building in Croatia. Also, while here, go and see (and hear) the ‘Sea organ’ – musical instrument played by the sea waves. Next stop, of course, is Šibenik, located just 50 km south from Zadar. Here you’ll find the Cathedral of St. James, which is on the UNESCO World Heritage list as well as four fortresses located near the sea that are built in the 16th century by Venice.

Island of Pag and Zrće beach

Most internationally famous thing about Pag is its Zrće beach. The beach is a well-known Croatian summer destination for partygoers, with several all-hours discotheques and beach bars operating during summer months. It regularly features gigs by internationally known house and trance DJs (Armin van Buuren to tell you just one name) at the peak of the Croatian summer season in July and August. Zrće is particularly popular among young club goers, while other pebble and sand beaches on the island are more family-oriented. If you’re young and up for some partying, we highly recommend you visiting Zrće – it’s just an hour and a half drive from Starigrad.

Zrmanja river is probably one of the most beautiful rivers in all of Europe. It is famous for rafting trips that take place in spring and autumn, and also kayak and canoe trips that are used during low water level period of July and August. Also its canyon and estuary was used as a set for many movies, with Karl May’s ‘Apache Gold’ about Native American hero Winnetou being the most famous. If you fancy these films you should definitely come here and book a visit to places where most of the scenes in it were taken.

Kayaking on Zrmanja river is fun and exciting.

So, here you go. As we promised, there’s something for everyone. If you need any more information please send us an e-mail (argyruntum@yahoo.com) or leave a comment below this post. We would be most happy to respond. Also, if you liked this post, please share it on social networks – let the world know about Croatia and its beauties. Thank you in advance.